Question: What’s more anticipated every year than the council’s plans for Piccadilly Gardens, the line-up for Park Life, and whether or not The Stone Roses are going to play yet another reunion show in Manchester all combined?

That’s right. They’re finally here, and this time they’re bigger and badder than ever. With an estimated 347,567 stalls and 10 weird Hunger Games style “zones” at this year’s Manchester Christmas Markets, stretching all the way from Castlefield to Dublin, you’re sure to find something unique at each stall that your family members would rather not have but will still smile at you when they open it.

And whilst the giant Santa always seems to not look as impressive as we thought compared to last year, when he goes up: shit goes down.

We’re huge fans of tourism guides, so here’s the Cheapest Guide to The Manchester Christmas Markets, and what you need to do to ensure you make the most of them:

We recommend getting there at least two months before they start, to avoid the queues.

Go to a Cash Machine

Honestly, people never learn. You need money to buy things, guys, and you can’t expect 598,897 stalls to all have a card machine each. If you’re at the Town Hall your nearest machines are somewhere by Tesco (if it’s working). Market Street? You’re sorted, there’s a ratio of two to every two people. King Street? Too expensive anyway. St Anne’s Square? Good luck getting to the other side. Northern Quarter? What are you doing up there, you silly sausage?

Once you’ve got your hard earned cash – we recommend around £250 p/p to really make the most of it-  find the nearest stall that is selling cups of the marvellous liquid that is foreign mulled wine (bloody immigrants). Don’t stop to look at the sausages or the weird looking Christmas tree decorations, you’ve got plenty of time for those later. Grab yourself a hot cup, marvel at this year’s design which kinda looks like a competition winner design and notably lacks the effort of previous years (we’re writing evergreen content here, people).Constantly re-fill when you’ve run out, you’re going to need it.

When you’ve finished with it, pocket the empty cup and feel like you’ve made a gain… despite having paid a deposit for the very reason you feel like a winner.

Now You Can Grab Yourself a Sausage

Or, if you’re not in the mood for an £8 hot dog, get yourself a £6 hot dog that’s notably not as good, or grab yourself a chunk of a big fuck off pig that’s chilling out on a fire. Once you have your chosen meal, struggle to find somewhere safe to eat it because if you don’t work in hospitality you won’t have mastered the art of walking and eating without giving yourself heartburn.*

Go on the Search for Macaroons 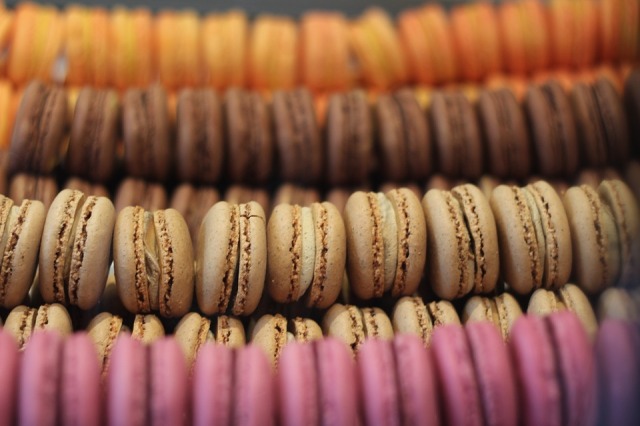 If you even think that you’re not going to buy any this year, then you’re not only lying to yourselves, but you’re lying to the world. They’re part of the tradition. You get your wine, you eat your hot dog, you over indulge on macaroons. Yes, you are fully aware that you can buy them in Sainsbury’s for 1/3 the price at any given time of the year… but lighten up, it’s Christmas.

Complain About The Amount of People There

It doesn’t matter that there’s 912,456 stalls this year, there’s still no fucking room at any of them.

Who do these people think they are? Christmas time is not for little children who can’t even be bothered to walk. Little fuckers. Let them and their parents know that it’s not acceptable by giving their pram a boot, and then profusely apologising in a passive aggressive way (if you’re British, it’s possible).

Then decide it’s not worth it. It’s cold and your feet hurt.

Act Like You Didn’t Want to Look at Anything

Approach a stall, see that there’s already 38 1/2 people looking at the stuff there, then tell yourself it probably doesn’t have what you want anyway and try to approach a different stall. Repeat until you see another pram.

Buy Something That You Will Never Ever Use

It does look kind of pretty. You’ll totally use it. What does it even do? Is it a door stop? You don’t even have a bread bin. Best £45 you’ve spent so far.

Look For Martin Platt From Corrie

He’s in there somewhere. Give us your cheese.

Then realise you can’t ice skate, and you don’t actually know where the rink is this year.

Retreat Into The Nearest Bar to “Get Away From it All”

Despite the fact that you knew how busy it would be, and there’s around 1.6 million stalls, and you’re only there for the Christmas Markets; you’ve still somehow strayed down an alleyway you didn’t know existed and it’s full of Christmas trees and wooden Santas and you can’t take it anymore. Just find a bar, settle down. If you want, you can marry. Look at me. I am old, but I’m happy.

And then get ready for the inevitable “where was my invite?” from at least four of your friends. Only two of them will actually mean it when they reply with “I’m just messing, hope you had a good time, I’m hoping to go soon xoxo”. – You’ve crushed their dreams.

Feel Greatly Underwhelmed for The Fifth Year in a Row.

Tell Yourself You’re Not Doing This Again Next Year

You’ve been pushed and shoved and bumped by more people than you can bear. You remembered how bad it was last year, and how that incident with the Youth Group Choir made the local news. Never again shall you return to the hallowed Manchester Christmas Markets… maybe.

Enjoy your time in festive hell and don’t forget: It’s not Christmas if you don’t call at least one person a cunt for stepping on your feet.

All stats have probably been made up.

*We were going to say this was a joke… but then thought fuck it.