I’ve been known to say the phrase: “I know all the classics if you can’t find anything you’d like on the menu”, and it’s a phrase that I’ve heard said by other bartenders in and around the place. It got me to wondering, however, just how many classics there could possibly be and what in the hell even constitutes a cocktail being labelled as “A Classic” and if someone using the phrase “I know all of the classics” could ever possibly be telling the truth or if they accidentally mean it in a completely different fashion to which they’ve said it.

First of all I looked for the “definition” of a classic cocktail and summed up everything thusly:

A classic cocktail is apparently one that “stands the test of time” and sticks around forever. Its name is always supposed to be simple and memorable (and not always pronounceable – see: Mojito, Daiquiri, Boulevardier, Vieux Carré, Mai-Tai). They have to be drinks that every bar can make using their ingredients in house. They have to have incredible back stories – if it’s not been made for a supermodel or an Italian Count then your cocktail has no chance of becoming a classic, that is today’s first lesson.

Then, if we take a look at Wikipedia…

“A classic cocktail is any cocktail which appeared in the publication of Jerry Thomas’ 1862 book, Bar-Tender’s Guide and most other cocktails created between then and the publication of Harry Craddock’s Savoy Cocktail book in 1930. They were also known by the specific type of glass used when they were served. Since the 1980’s, a cocktail has come to mean any drink created in any type of glass”

“Any drink created in any type of glass” – Wikipedia at its vague best there. The interesting thing here is that according to a stranger out in the world, there have been no classic cocktails created past 1930. Very interesting, Wikipedia, very interesting.

Now if we venture back to the amount of ‘classic’ cocktails: The IBA lists 30 cocktails as “Unforgettables“, 31 cocktails as “Contemporary Classics” and 16 as “New Era Drinks”. So, by the IBA’s rulings, there are only 77 cocktails that need to be known in order for you say that you technically “know all of the classics” – assuming of course that we are all in agreement with those drinks being classed as classics. Seventy-seven is a relatively small number of cocktails for most bartenders nowadays, with a huge number of bartenders having to learn that amount just for their specific venue’s menu.

I’ve got an issue with the IBA’s choice of cocktails, however, and it’s the fact that the cocktail “Bacardi” is on there as an ‘Unforgettable’ and a Martinez doesn’t feature anywhere in the three categories and that, to me, is just mind-blowing and is definitely not a sponsorship thing. Also, the “Original” Bacardi cocktail was literally just a daiquiri made with Bacardi. What?

Obviously people take the IBA seriously and some take their word as gospel, but there’s no mention of a corpse reviver (1 or 2), or even a Last Word – drinks that I myself would call classics – Is it a case of the IBA not listing drinks that are part of a family of cocktails? If that were so then would the Martini be replaced by the Martinez but then would that just be represented by the Manhattan? Would the Negroni have to be taken off because of the Americano? The HarveyWallbanger wouldn’t be on the same list as a Screwdriver? (btw, a Screwdriver?) Who decides on the lists?

There are a numerous amount of websites that class an all manner of different drinks as their “Must Know” cocktails and nearly all of them seem to be able to agree on a select amount – does their labelling of “Must Know” mean that they would call those drinks classics? Drinks like the Negroni, Manhattan, Martini, Old Fashioned, Daiquiri and the Mojito can always be found on a list of ‘must be able to make’, but that’s not a lot of cocktails and you’d expect any cocktail bartender to know how to make at least six drinks, and again: How did they all come to agree on those drinks?

Is there a definitive list of cocktails that everyone has agreed upon that a bartender must know how to make before they can use the immortal words: “I know all of the classics”? Would they know how to make a “Scofflaw”, for example? I had/still have no idea what it was/is, but Liquor.com say it’s a classic and a must know for every bartender. If someone were to ask me for one I’d have stood for a good 30 seconds staring into their face with an open mouth whilst exhaling “Errrrrrrr” (no-one’s ever asked me for one, I doubt anyone in England has ever asked for one)

The Difford’s Guide provides us with a larger base of cocktails that are “Most Well Known”. They have a list of the 100 most known cocktails and there isn’t a mention of the ‘unforgettable’ Bacardi or the “must know” Scofflaw. It’s confusing to know who to trust when it comes to the task of learning all of the classics.

Firstly, put aside that they’ve put a Cosmopolitan on there twice, this is a good list. Every one of those drinks is beneficial to a bartender’s arsenal (technically all drinks are beneficial, I know). Technically speaking it is aimed at “Everyone” and not just bartenders, but it does fall 75 cocktails short of Difford’s 100 must know and it doesn’t include a Mojito – put your personal feelings for Mojito’s aside, you have to agree they are in the category of “Classic Cocktail”, or at least “Must Knows”.

Of course, we have to pay notice to the fact that just because a cocktail is called a “must know” it doesn’t necessarily qualify it as a classic, which again brings me back to the question of “What is a classic and who decides?”

If we also take into consideration the fact that different bartenders classify different drinks as classics. One ‘tender might say that an Espresso Martini isn’t a classic whilst another might excessively defend the drink and call it a classic. Goddamit, who agrees on what a classic is anymore?

Is It The Customer?

Without customers there would be no bars and without bartenders there would be no bars. The two work in perfect harmony because they need each other in different but equal amounts, so it only seems right that it’s consumer demand and bartender knowledge of demand that determines what a classic cocktail should be, right? Let’s face it, you can know all 700+ cocktails in the Savoy Cocktail Book but just because Wikipedia says they’re all classics, doesn’t mean anyone will ever order them.

It might appear overly obvious and you might have already known it, but the definition of “Classic Cocktail” actually just means: “Most Popular With Consumers”. Could it be consumer demand that defines what is and isn’t a classic cocktail? Because they’re the ones ordering them.

However, this brings me back around to the choices of the IBA, Difford’s, Liquor.com and SeriousEats. If consumer demand determined what is and isn’t a modern day classic cocktail, then surely their lists would be based off of market research? 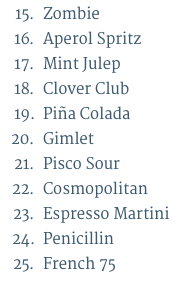 This list does hold a lot of resemblance to a lot of website choices for must know cocktails; It does make sense that you need to know what is popular, but there are some discrepancies within the list. There’s no mention of the infamous Bacardi Cocktail, Scofflaw or a Porto Flip (Which the IBA say is an “Unforgettable”), and two of those are completely and incomprehensibly unforgettable according to the IBA.

The point of this (I know you were wondering) is that if classics are now determined by consumer demand, then this should be the ultimate top 25 list that bartenders need to know in order to say the broad/not really meaning to be broad term: “I know all the classics”, right?

What Do Other Bartenders Say?

Speaking to other bartenders about the subject garnered the exact same response from all of them: It is impossible to know all of the classics. Be it a case of there being so many out there, or simply a case of “Who decides what a classic cocktail is?” Region played a very strong role in the “need to know” cocktails, as well as the style of venue you work in. The very definition of “Classic Cocktail” is a blurred one and has become a broader term than it may have originally been intended for.

I spoke to a few non-bartenders about the issue as well, and what I learned was very interesting. For someone who doesn’t bartend, their bartender knowing only a handful of “classics” is deemed to be more than enough for them to be believed when they say their knowledge is up to scratch, and in the end isn’t it the customer ordering and drinking the drinks that ultimately benefit from that knowledge?

So, How About Bar Menus That List Classic Cocktails?

It’s a question we’ll be covering in more detail in the future, but looking into this topic has gotten me extremely interested in finding out how those bars decide what to include on their classics menus, and what they choose to leave out.

So Where Does This Leave Us?

The phrase “I know all of the classics” is a very loose term that presents the offer of a smörgåsbord of cocktail possibilities, but actually represents a relatively small choice of drinks. Drink knowledge becomes specific to the venue and region you’re working in, it’s automatically tailored to suit the needs of your clientele wether you mean it to or not.

The definition of the words “Classic Cocktail” is one that hardly anyone can ever agree on anymore. If a classic is a drink that has garnered the reputation of a household name, then we are left with very few drinks, if a Classic Cocktail is any drink after 1862 but before 1930, then we have a Megabus full of cocktails that are classic just because they’re old but no-one will ever order them, if a classic is one that sells exceptionally well then we’re forever restricted by geography.

In truth, there are so many factors that determine what a classic can and can’t be that the immortal words of “I know all of the classics” can never be uttered by anyone. In truth, anytime you hear someone say “I know all the classics if you can’t see anything” they are actually meaning “I know enough cocktails to offer you something you will like, and if not… I know how to make a rum and coke.”